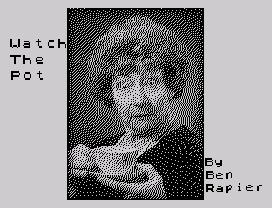 This one has come unexpectedly (maybe we got used to the excesive amount of hype our previous entry got before being released) and with extra crap-factor due to the fact that Ben sent it to the wrong email address. The game opens with an awesomely digitized opening screen which shows Dr. Who in a woman costume, which leads you to believe that the game is going to be about trans-gender activities, but you are wrong in such belief. In fact, the game is about the ancient art of boiling water so you can enjoy a good cup of tea. You know a good boiler when you meet one: somebody who can deliver a great tea time experience in the less amount of time possible. And this simmulator is just about that: manage to boil the water in the pot as soon as possible. For such a noble cause you can use keys Z, X, which you have to press alternatively as fast as you can. You will literally watch the pot making the water boil thanks to the awesome animated affects Ben has added to the experience (completely unneeded as they don’t affect gameplay, but who’s gonna complain for some free-of-charge eye candy?). In sum, Watch the Pot is an awesome community game –  you can bring your friends home and spend hour after hour competing on who can make tea faster! There’s no limit in the amount of players who can enjoy this masterpiece.