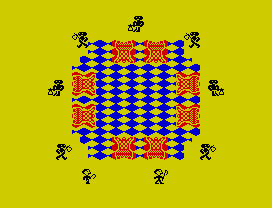 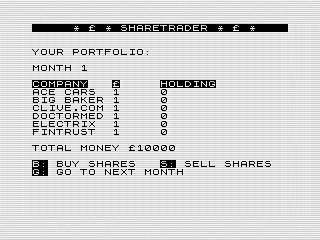 Mr. Osborne‘s next entry, also for the ZX81, is a port of a former CSSCGC entry from 2000. It’s one of those boring games a la Tai Pan (and I get my coat) where you basicly sell and buy things and stuff like that. I will never understand how somebody can find this kind of games amusing, as if we didn’t have enough worries in real life. But hey, here it is! The author claims it contains all the features from the original (albeit with a few more bugs), and I will be taking his word for this. I’m quite sorry, but I can’t really stand more than two minutes with this kind of games, but worry not, the judges love them. It looks clean and well presented, and the ZX81 display is always sexy. So here you are, have fun! 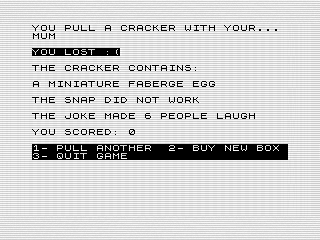 This is one of those times where I find it better to reproduce the elaborate email which contained the game: “I think I deserve to win, because I coded this game on a real ZX81, and no emulation was involved at all (apart from checking that it works on an emulator, which it does). I’m now the proud owner of a ZXpand interface, a miracle of modern science that allows the ZX81 to save programs in an emulator-ready format direct to SD memory cards. I think you’ll find that Mega Christmas Cracker Simulator is a tour-de-force, which pushes the humble ZX81 to new heights. The advanced simulation engine uses chaos theory techniques to definitively model a range of cracker types and cracker-pulling scenarios, considering such variables as which relative you are pulling the cracker with, and how much money you were willing to spend on crackers in the first place. Once you’ve pulled your cracker, it’s given a score, so you can compare different types for quality of prizes and funniness of the joke. A useful program, I’m sure you’ll agree!“. Yes, Mr. Osborne, I do agree. 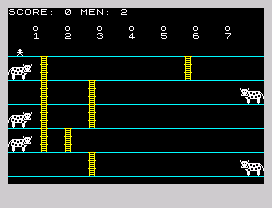 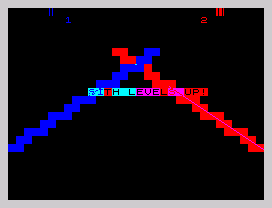 Nobody knows how, but Apenao got the official license from Lucas Arts to produce the ZX Spectrum port of their latest blockbuster in the Star Wars franchise, a MMORPG (won’t tell what it means ’cause I always mix up the initials). The problem was that they are quite unflexible when it comes to deadlines, and the time Apenao had to develop this game was minimal. And it shows. Luckily, Apenao managed to extract the most important aspects of SW:TOR and gave full priority to them, so they are completely implemented. So the game lacks some things from the original, but the essence is there: the exciting light-saber duels between Jedi Knights and Lord Siths, complete with power-ups and character level growth. And, of course, you can’t play this alone, as this is a MMORPG. May the force be with you, young padawan! (sorry, I had to say that). 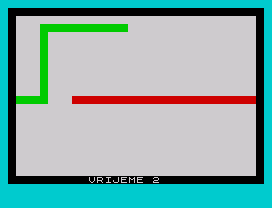 Well, this one comes in an unknown language (for me). The author sent me the correct translation to every message on screen, but I won’t tell you ’cause I believe that it would spoil all the fun. The game starts asking for a lot of questions, then lets you position two squares on screen (using Q, A and M for each), and then it plays some kind of tron-like cycles battle. You control the leftmost “cycle” (or square), and the rightmost cycle is controlled by the computer. Well, I’m not very sure about that, ’cause it never turns so it’s pretty easy to beat. Unless I’m missing something. Which I can’t tell. Mr. Sver didn’t provide any explanations, so you’ll have to figure this out. You can always look at the sources (I was a nerdy kid who did exactly that when I was 13 and had no clue about what I was supposed to do in crappy BASIC games and type-ins). 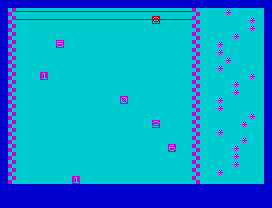 This is one of those “musical games” where the sound produced by the computer isn’t music at all. This so called game is a collection of more than 50 one-liners: a couple of instructions/info blocks and 50 levels in 50 BASIC one-liner separate loads. The concept is pretty simple and straightforward: press the correct key when the labeled square containing which hits the top-most flickering lines. Like an upside-down Guitar Hero (scrolling from bottom to top using Sinclair BASIC is easy, but doing the opposite is not), but you use the keyboard instead of a guitar. And you listen to random bleeps instead your Metallica favourite number. But the achievement is the game itself: I wonder how this guy got the nerve to produce 50 levels without getting bored. Great, great achievement, to be honest! 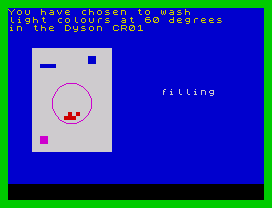 This is the kind of entries I enjoy most. A good, nice simulator. And, for the first time in history, a great Washing Machine Simulator. In the author’s own words, «Presenting the first washing machine simulator for the Sinclair ZX Spectrum, the most realistic and complete laundry simulator yet written. Featuring three different washing machines, 4 wash temperatures and 3 different types of clothes you can wash this is the ultimate in clothes cleaning gaming excitement. Never before have laundry and gaming been married so successfully as in Washing Machine Simulator. Realistic sounds during the filling, wash and spin cycles. Amazing animated graphics. Superb reality and playability. Literally minutes of fun for all the family». And it doesn’t come short at all. I haven’t seen such a faithfully simulation in years of videogaming. This is really one of the best entries we’ve gotten so far, and we have got plenty of good ones! So watch out. Cows and simulators are win. So there’s a special prize for every faithful cow simulator from now on. What are you waiting for? 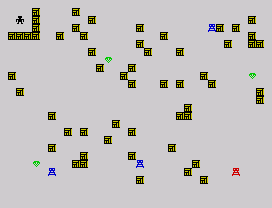 Paul returns with another great entry. In this game, just like the instructions explain like 293 times, you must not be seen. There are plenty of patroller robots wandering around and they can see in four directions, this is, up, down, left and right but they can’t see diagonally. They can’t see you either if you are behind a yellow block (which you can push to move them somewhere else). So you have two choices: first, you can just stay where you start. There’s a good pair of walls made of yellow blocks you they have absolutely no chance of seeing you. But this isn’t very enticing, is it? So your second choice, which may look more attractive, is simply start moving around the map gathering green gems. But, remember, do not be seen! And, I must say, this is an incredibly difficult task. It may look easy at first as there’s plenty of yellow blocks all around the place, but man, those patrollers surely patrol. My record is two gems. After that, I just threw the computer through the window. So be warned!

Remember: DO NOT BE SEEN! 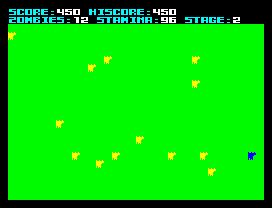