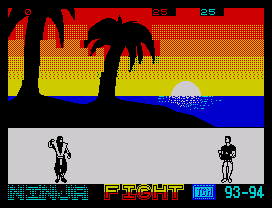 Our fellow Baron Ashler, who has just started a new developing group and has a very nice debut game under due to be released, has dug in his old files to retrieve two pieces of the finest crap, and this is the first one. Be sure to use an emulator in Spectrum +2A/+3 mode and use the Loader option in the menú to load this one – and activate flash loading, otherwise you’ll be sitting waiting for 7 minutes straight – or so. After it has finished loading, the game showcases a nice, but non-bypassable tune using the PLAY command. So add yet another couple of minutes of waiting. When, in the end, you get to the menu screen, you may have forgotten what you were doing in front of your computer, but hey! Redefine your keys and start… playing? The game is a one on one beat’em’up which makes use of the RAM disk to display big graphics. You control an avatar which is reminiscent of Mortal Kombat‘s Scorpion or Sub-Zero (couldn’t tell due to the monochrome graphics) and you objective is to beat the crap out of any opponent who dares to face you. And this proves to be a test of endurance: just to approach your enemy takes ages due to the sluggish animation, and once you have done it you just have to sit pressing kick and it will be done – provided the random AI doesn’t make him do the same, ’cause it seems that his hits are counted first. And that’s all. A good contender for the prize, this time featuring really, really good graphics, but being a complete chore to play.

Keys to be redefined are for LEFT, RIGHT, KICK and PUNCH. 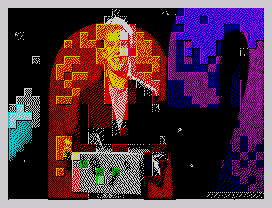 Enter the awesomeness, ladies and gentlemen! Packed up with great three-channel AY music, this game will induce you to the greatest TV contest ever: Numberwang!. There are numbers involved, but fear not, it has nothing to do with maths.  I’m pretty sure that we all have felt terribly envious of  Simon and Julie. Well, thanks to this awesome game, you will be able to enjoy the awesome Numberwang yourself! Complete with the Wangernumb and the rotating of the board, and incredibly adorned, as mentioned, with awesome renditions of the show theme songs, this game provides the TRUE experience. And to add up even more, the game boosts awesome digitized graphics (with a groundbreaking tetris-3D-effect on top), a great colour scheme, and… have I mentioned the music? Be sure to run this game in a 128K model, for obvious reasons.

Paradogically, being a game based in numbers, you won’t be able to read any of them in the BASIC listing. Boo, we’ll never be able to understand the game logics by studying the sources. What makes a Numberwang will remain a mystery. By the way, as a punishment for hackers, if you break into the program and then want to play again, you will have to load the title screen from tape again. So think about it before you do.

Numbers: Numberwang!
BREAK: Hack. But you won’t see the numbers.