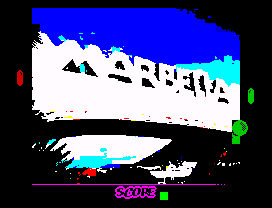 Heavily advertised and hyped in the WOS forums, this entry by the infamous (crap) game designer Apenao really lives up to the expectations. Penned as a grounbreaking game, it uses revolutionary techniques, which achieve TRUE hardware sprites on any ZX Spectrum by writing to the port EWFG to rewrite the ULA BIOS making the computer dizzy in the process or something like that. Sadly, these techniques don’t work properly on any of the emulators I’ve tried (this is, Spectaculator, as I’m too lazy to install (yet) another one), as they rely on frying actual Speccy circuits, and make use of the cathodic ray tube of your telly to actually fry your retinas – that’s the only way you can really enjoy the effect, but we have been reported that you can also simmulate it using a cheese grater in front of your eyes and moving it very fast, the same way we all watched encoded porn films late at night. This is a top-notch effect which may not be understood by plain simple speccy users, specially those who are heretic enough to play speccy games on dirty emulators.

Complete with a totally unnecessary title screen which literally takes ages to get drawn and dodgy collision system which actually makes the game more enjoyable, this game is so well designed that it requires a second player – This is a computer game which, besides entertaining you, will help you making friends and not becoming a secluded weirdo. All thanks to Apenao.

Who wants to be king, when you can be a God?